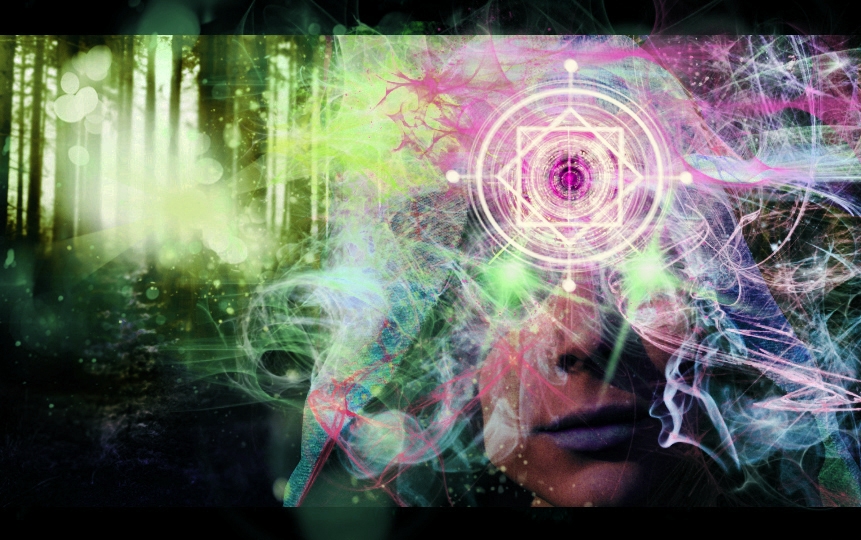 In Jonathon Miller Weisberger’s Rainforest Medicine we learn how the Secoya tribe in the Amazon utilize ayahuasca as a sacrament. Embedded within the sacred act of magical plant ingestion is a mythical framework, a sacred form of storytelling protected by the elder of the tribe specifically detailing inner perils and potential pit-falls of the spirit-life, dead ancestry who may be re-contacted while traversing the spiritual plane, and various shamanic power totems that may approach and merge with the Ayahuasqero as they dance with devils and laugh with the Gods in innerspace. rs

Entheodelic storytelling (a term I co-coined with Graham Hancock, Rak Razam, and Jeremy D. Johnson) is a new international transmedia paradigm led by many important scholars and artists interested in shamanism that recalls a time in which fables once served as specific symbolic reminders to initiates who were to undergo trials leading them to the spirit world. Within this framework, contemplative traditions and a multitude of spiritual paths are equally at home with the plant path.

Those of us who are Western European in descent, are also well aware of the sensitive issues and dangers surrounding the appropriation of indigenous cultures—and neocolonialism in general—and therefore make a conscious act of deriving material for art from the European witchcraft tradition (ayahuasca may have been brewed in the “witches cauldron”), in addition to the pop-culture of the West. Michael Winkelman also explores the similarity in the spirit-healer archetype in his manuscript Shamans, Priests and Witches: A Cross-Cultural Study of Magico-Religious Practitioners.

In contrast to the term psychedelic (mind manifesting), entheodelic themes in the literature paradigm are similar to themes explored in the visionary art paradigm, often extending into the supernatural and sometimes including interactive transhuman intelligence or entities. The archaic revival narrative established by the McKenna brothers is also a distinct influence.

Sacred stories at one point in time were holographic visions that the shaman actually shaped through words, but were also predominantly visual, morphed and structured by words, but seen on the astral plane and material plane simultaneously. These stories were specific in function. They were a means of passing along wisdom and to help newly initiated members navigate in Innerspace. According to Grant Morrison in Supergods, comics popularity as a medium is a testament to the longing that the West has to contact the Gods and connect to the primal magic of the invisible world once again. In it’s temporal amnesia, the West has temporarily lost sight of this ancient storytelling tradition, but these secrets are not totally lost.

More recently, however, the work of guests on the entheodelic interview series have all contributed in a unique way through both transmedia art and non-fiction activist work in order to resurrect this elder view of mythology and storytelling as it relates to psychedelic shamanism. While the greats in supernatural horror, sci-fi and fantasy literature/comics are all inspirations; the paradigm is not limited to those genres necessarily. Of course, we all love art that has nothing to do with entheodelic storytelling.

For inspirations on the artistic side, the visionary work of Alejandro Jodorowsky (in both film and comics), could be considered to be a proto-Entheodelic founder, in that he was attempting as early as 1970 to re-forge the supernatural aspects of entheogens with spirituality and techno-shamanic themes. The psychedelia of the predominantly European early Heavy Metal scene, (especially the cosmic dark fantasy of Philippe Druillett), has inspired my work with in the YUGAVERSE mythos. Yoshitaka Amano’s harkening back to Eastern forms of shamanism in the beautiful concept art of Final Fantasy series, and also in his metaphysical graphic novel Deva Zan (which features the akashic-records as a primary plot point), has also been distinctly influential.

Jan Kounen also forged an early pathway into the cosmic visionary dimensions of the metaphysical worlds opened up by ayahuasca in his documentary Other Worlds and the film Renegade (an adaptation of Jean ‘Moebius’ Giraud’s Acid Western comic strip Blueberry). Darren Aronofsky has also contributed in the more general visionary depictions with The Fountain, and more recently in connecting ayahuasca with the prophetic/divinatory sense in Noah.

I believe that our spirit must become as strong and formidable as our machines. There are many ways of striving towards this goal, but one of the fastest ways, as Done Jose Campos says in Rak Razam’s Ayahuasca Sessions, is the sacred plant path. Ingestion of power plants may in fact be only one the many Jedi-like ways of surviving what Graham Hancock has called the “frankenstein civilization”, or what mythologist and cultural critic John David Ebert has pointed to as the “mega-machine” that we presently find ourselves in.

While themes of astral flight, travel to the underworld, supernatural weapons and shamanic-power animal transformation are definitive tropes in shamanistic art, these and other supernatural themes need not be explicit in order to be considered entheodelic. In fact, non-fiction, documentary, and activist research not formally addressing the new paradigm, or otherwise subtly informed by it and still focusing on the history of metaphysics, evolution of consciousness, paranormal phenomena, post-ironic metafiction, history of myth, spirituality and psychedelic medicine, could still be seen to be informing and embedded more subtly within the greater thread of entheodelic storytelling, and the humanities in general.

As Lewis Mehl-Madrona has previously said, everything is a story and therefore proper narrative therapy—new 21st century stories that focus on spiritual evolution and reintegrating the archaic revival, though also not limited to those core themes necessarily—must be applied to individual psychology as the healing balm of medicine would be to chafed skin.

The return of the sacred story, just like the resurgence of interest in entheogenic medicine, is here to stay.