Where Breath and Beats Merge: Why Festivals Satisfy Our Spiritual Longing

Posted on September 12, 2014, updated on October 14, 2014 by inspiredneuron | 645 views
Article from Whole Times, submitted by @inspiredneuron 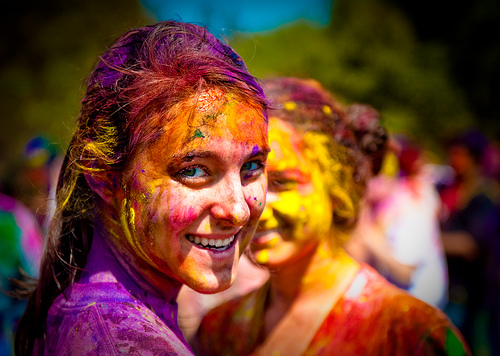 Late every summer, 60,000 weekend (or week-long) warriors pack RVs with pimped-out bicycles, florescent pink and orange wardrobes, goggles, bandanas and whatever other accoutrement assist them in not only surviving but thriving in Nevada’s summer heat. They fly into Reno and San Francisco and Vegas and drive hundreds of miles into the desert to converge at Black Rock City, a bleak and lonely landscape transformed into a carnival of colors, sounds and lights in what has become one of the planet’s most beloved mass gatherings of the modern era.

The voyage itself has all the makings of an epic journey, the stuff of mythology. Hours of desert driving prepare your brain for the adventure ahead. Once you hit Gerlach, a single-lane road winds out of this small town whose economy has benefited immensely from annual pilgrimages: gas, food and bikes all available in and out of Black Rock City. The anticipation builds. Normally the slow hour over unpaved terrain would be torturous. Yet that, too, is part of the ritual known as Burning Man.

multimillion dollar industry, critics claim Burning Man has lost its soul. While it has changed drastically (given noticeable differences between my visits in 2007 and 2012), this fete, like hundreds of smaller gatherings produced year-round in America, serves our basic needs of connection and creative expression. We are social animals; assembling in groups is part of our genetic identity.

The mythologist Joseph Campbell discussed rituals we all recognize—marriage, death, presidential inaugurations, new employment—by which the individual is transformed in ways that are critical to the social fabric. When we enter a courtroom, for example, the judge is playing a mythological role that (ideally) supersedes the individual donning the black robe, just as two people are joined through the ceremony of marriage.

One of the tragedies of modern America, Campbell writes, is that we have lost certain mythological rituals, such as the passage from childhood to adulthood. Cultures long celebrated this rite, which continues in many non-industrialized cultures today. In our Western culture however, initiation, such as it is, is facilitated by our educational system—you graduate and get a job—without the larger cosmological inheritance that mythologies involve. With this loss, he believes, an integral part of being human has been shattered. And so we create new rituals to fill this void.

Which is why festival going, a trend that picked up steam in the United States in the 1960s, has evolved over the last half-century to suit our ritualistic needs. Festivals today offer a growing secular culture what used to be found in religion: a festive place to gather and celebrate spirituality, perhaps even play out our own rites of passage. While from the outside these congregations can appear bacchanal and exploitative—alcohol and drug use run rampant—they also serve the need for mass ritual and shared endeavor. They ground us, offer us an identity beyond the identity we have grown accustomed to in our daily lives.

A Merging of Rituals

Yoga, a ritual unto itself, is now ubiquitous on the festival circuit. Beginning with early 19th century fringe thinkers gobbling up translations of the Bhagavad Gita, yoga’s ascension and evolution in the West has continuously reflected the changing goals and desires of who we are as Americans. In the process it has meant many things to many people, eschewing any sense of a “pure” yoga. The types of yoga we practice today are a far cry from the techniques and tools that have been in circulation for the last 4,000 years. Yoga has, however, always been tribal.

Thus it is no surprise to find yoga festivals paying homage to what has emerged as one of the most popular forms of ritual practice in 21st century America. First landing in Squaw Valley, California in the summer of 2009, Wanderlust is considered the premier yoga-music fest, having expanded to numerous locations over the last five years. There is nothing particularly special in the offerings of the teachers; there are simply more attendees for what they already do. It is in that “more” that the classes feelspecial, however. Our practice feels validated with larger numbers.

The same is true of yoga/kirtan festivals, such as Bhakti Fest in Joshua Tree, Pranafest in Ashland, Ore., and smaller regional collectives throughout the country. Last year at Shakti Fest, the spring goddess-themed festival, I spent more time in vendor stalls and around the yoga area than at the music stage. Conversation is companion to entertainment.

Arguably the largest music festival that now includes yoga is Lightning in the Bottle, whose producers are Burning Man vets. Each year yoga classes have become more prominent; this year’s advertisements featured instructors on equal footing with musicians. What was once a morning activity has become integral to the success of this popular California congregation. Breath and beats merge.

Ironically, the more populated a festival is, the more pioneering fans lose interest. Recall Burning Man, which began as a bunch of friends on the beach igniting a makeshift effigy. With 60,000 attendees it’s impossible for any one camp to claim ownership of a “meaning” behind the collective. Instead, hundreds of camps offer smaller rituals, each with its own spin on the larger messages of unity, art and ecological awareness—though the last is hard to justify given the incredible amounts of oil and diesel necessary to fuel an entire city for a week.

This is exactly how human beings have socially evolved, from tribes of 150 people or fewer to city-states that first emerged in the Middle East over the last 10,000 years. As cities formed, divisions made up the whole. Regional ceremonies grew in size and scope; deities were traded and abandoned. What remained constant was the collective, regardless of what was being sacrificed or prayed to. The shape of the ritual was not as important as that there wasa ritual.

Yet for Burning Man, there is a central theme: the burning of the man in nuclear fury on Saturday night. The entire week of smaller rituals—yoga classes, ecstatic dances, communal chai, short showers and long naps—leads up to mass explosion that unifies the whole. Humans might be vastly different in how we celebrate together, but that we celebrate together is who we are as social creatures. Our rituals evolve to suit the needs of our times.

For some work-weary souls, Spartan races—tests of physical and emotional endurance—provide the enlivening spark. Others have devoted their lives to festival hopping, like Deadheads in parking lots. But for those tired souls whose sense of community feels stunted, the festival scene serves as a kind of reboot. A long weekend away surrounded by music, art and creativity offers a primal connection that appeals to a lifestyle normally ensconced in urban anxiety or suburban tedium.

For what has ritual or religion ever truly offered beyond community? The interpersonal connection one feels with a deity can be accomplished alone, anywhere; what brings us together is never a bad thing. It is the spirit of gathering with thousands of like-minded folks that fuels the proliferation of festival culture. In the spiritual communion of music, art and movement we find our mythological expression.