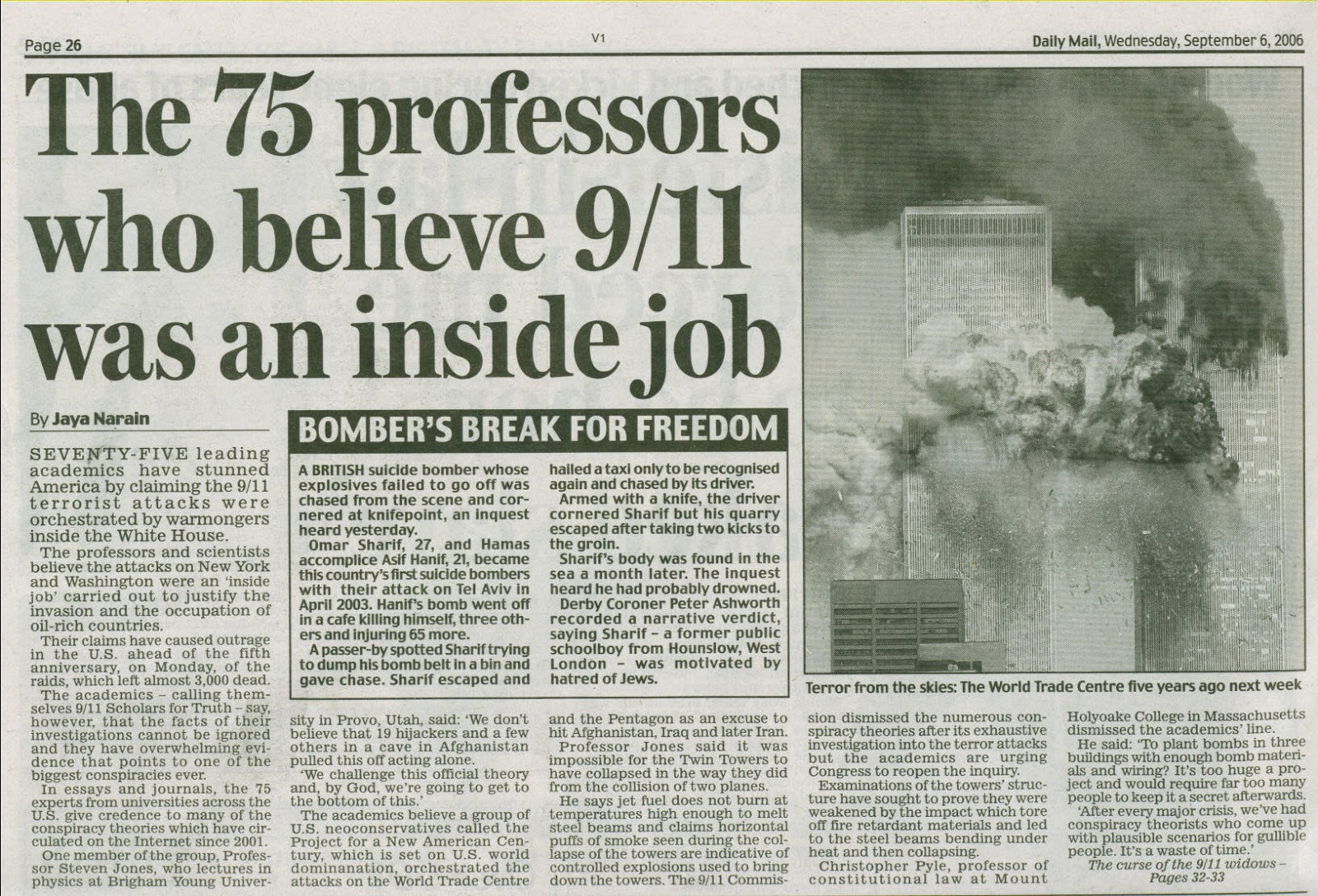 Research into the events of September 11 by Brigham Young University physics professor, Steven E. Jones, concludes that the official explanation for the collapse of the World Trade Center (WTC) buildings is implausible according to laws of physics. Jones is calling for an independent, international scientific investigation “guided not by politicized notions and constraints but rather by observations and calculations.”

In debunking the official explanation of the collapse of the three WTC buildings, Jones cites the complete, rapid, and symmetrical collapse of the buildings; the horizontal explosions (squibs) evidenced in films of the collapses; the fact that the antenna dropped first in the North Tower, suggesting the use of explosives in the core columns; and the large pools of molten metal observed in the basement areas of both towers.

Jones also investigated the collapse of WTC 7, a forty-seven-story building that was not hit by planes, yet dropped in its own “footprint,” in the same manner as a controlled demolition. WTC 7 housed the U.S. Secret Service, the Department of Defense, the Immigration and Naturalization Service, the U.S. Securities and Exchange Commission, the Mayor’s Office of Emergency Management, the Internal Revenue Service Regional Council, and the Central Intelligence Agency. Many of the records from the Enron accounting scandal were destroyed when the building came down.

Jones claims that the National Institutes of Standards and Technology (NIST) ignored the physics and chemistry of what happened on September 11 and even manipulated its testing in order to get a computer-generated hypothesis that fit the end result of collapse, and did not even attempt to investigate the possibility of controlled demolition. He also questions the investigations conducted by FEMA and the 9/11 Commission.

Among the report’s other findings:

No steel-frame building, before or after the WTC buildings, has ever collapsed due to fire. But explosives can effectively sever steel columns.

WTC 7, which was not hit by hijacked planes, collapsed in 6.6 seconds, just .6 of a second longer than it would take an object dropped from the roof to hit the ground. “Where is the delay that must be expected due to conservation of momentum, one of the foundational laws of physics?” Jones asks. “That is, as upper-falling floors strike lower floors—and intact steel support columns—the fall must be significantly impeded by the impacted mass.

How do the upper floors fall so quickly, then, and still conserve momentum in the collapsing buildings?” The paradox, he says, “is easily resolved by the explosive demolition hypothesis, whereby explosives quickly removed lower-floor material, including steel support columns, and allow near free-fall-speed collapses.” These observations were not analyzed by FEMA, NIST, or the 9/11 Commission.

With non-explosive-caused collapse there would typically be a piling up of shattered concrete. But most of the material in the towers was converted to flour-like powder while the buildings were falling. “How can we understand this strange behavior, without explosives? Remarkable, amazing—and demanding scrutiny since the U.S. government-funded reports failed to analyze this phenomenon.”

Steel supports were “partly evaporated,” but it would require temperatures near 5,000 degrees Fahrenheit to evaporate steel—and neither office materials nor diesel fuel can generate temperatures that hot. Fires caused by jet fuel from the hijacked planes lasted at most a few minutes, and office material fires would burn out within about twenty minutes in any given location.

Molten metal found in the debris of the WTC may have been the result of a high-temperature reaction of a commonly used explosive such as thermite. Buildings not felled by explosives “have insufficient directed energy to result in melting of large quantities of metal,” Jones says.

Multiple loud explosions in rapid sequence were reported by numerous observers in and near the towers, and these explosions occurred far below the region where the planes struck.

In January 2006 Jones, along with a group calling themselves “Scholars for 9/11 Truth,” called for an international investigation into the attacks and are going so far as to accuse the U.S. government of a massive cover-up.

“We believe that senior government officials have covered up crucial facts about what really happened on September 11,” the group said in a statement. “We believe these events may have been orchestrated by the administration in order to manipulate the American people into supporting policies at home and abroad.”

The group is headed by Jones and Jim Fetzer, University of Minnesota Duluth distinguished McKnight professor of philosophy, and is made up of fifty academicians and experts including Robert M. Bowman, former director of the U.S. “Star Wars” space defense program, and Morgan Reynolds, former chief economist for the Department of Labor in President George W. Bush’s first term.