The Effects of Thoughts on Water 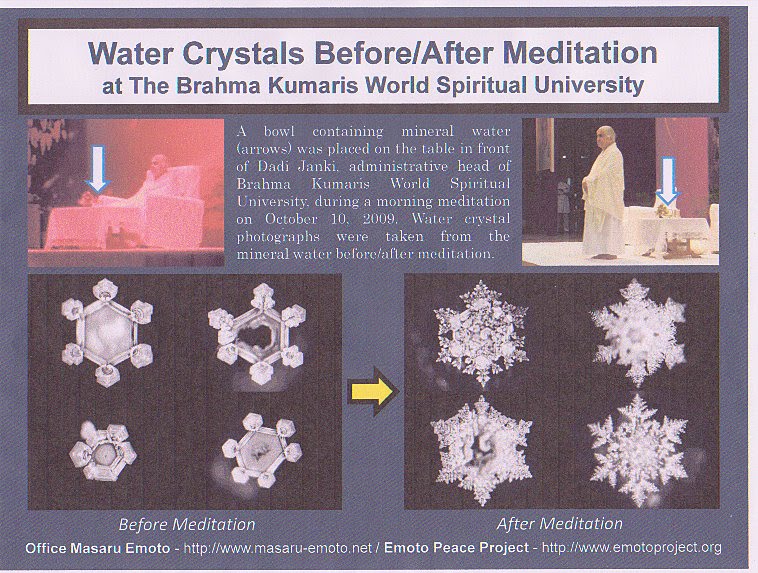 Through the 1990′s, Dr. Masaru Emoto performed a series of experiments observing the physical effect of words, prayers, music and environment on the crystalline structure of water. Emoto hired photographers to take pictures of water after being exposed to the different variables and subsequently frozen so that they would form crystalline structures. The results were nothing short of remarkable.

Masaru Emoto was born in Yokohama in July 1943. He is a graduate of the Yokohama Municipal University’s department of humanities and sciences with a focus on International Relations. In 1986 he established the IHM Corporation in Tokyo. In October of 1992 he received certification from the Open International University as a Doctor of Alternative Medicine. Subsequently he was introduced to the concept of micro cluster water in the US and Magnetic Resonance Analysis technology. The quest thus began to discover the mystery of water.

He undertook extensive research of water around the planet not so much as a scientific researcher but more from the perspective of an original thinker. At length he realized that it was in the frozen crystal form that water showed us its true nature. He continues with this experimentation and has written a variety of well received books in Japanese as well as the seminal Message from Water published bilingually. He is married to Kazuko Emoto who shares his passion and is head of Kyoikusha, the publishing arm of his company. They have three children.

Mr Emoto took water samples from around the world, slowly froze them, then photographed them with a dark field microscope with photographic capability. As each water crystal is unique, around 90 photos would be taken of the same water source, and the water crystal photo that represented the majority would be chosen.

The next few pictures are of water crystals from different sources. Generally, clean healthy water creates beautifully formed geometrical crystals, while polluted water is too sick to form any crystals at all.

The next few photos are of water exposed to different types of music. Distilled water would be placed in a bottle between two speakers and specific music would be played for one hour. The water was then frozen and photos taken.

Mr Emoto decided to see how thoughts and words affected the formation of untreated distilled water crystals.
This was done by typing words onto paper, then taping the paper onto glass bottles overnight.

Note that the negative words ‘You make me sick, I will kill you’ resembles an image of polluted water.

Now we see the affect of thoughts and intent on the water.
Below left is an image of very polluted and toxic water from the Fujiwara Dam. Below right is the same water after a Buddhist monk (Reverend Kato Hoki, chief priest of Jyuhouin Temple) offered a prayer over it for one hour. Prayer, that’s sound coupled with intention, seems to have an extraordinary ability to restore the water back to its natural, harmonious, geometric symmetry.

Here is the FULL DOCUMENTARY

What Does This All Mean?

With regard to the molecular structure of water, our intent (thoughts), words, ideas and music have a profound healing or destructive effect on the water.

Since the human is 50% to as much as 70% water — Ultimately it means that what we think creates our reality, not just emotionally but physically.

Since the planet is also 70% water these experiments have profound implications for the environment also — Could this mean that we could ‘think’ a polluted stream clean again?

Since asking the question I’ve learned that these experiments are indeed being done in Japan through Mr Emoto’s work. Three hundred people, usually led by someone proficient in focus and meditation (a buddhist monk for example) will gather around a polluted stream and focus healing and well-being onto the water for approximately one hour. Mr Emoto has reportedly documented these on film which I have not yet seen. According to eyewitnesses the water would become visibly clearer approximately 15 minutes after the meditation.

If this is indeed the case … the possibilities are endless.

For more information on Emoto’s experiments with water, please visit his website