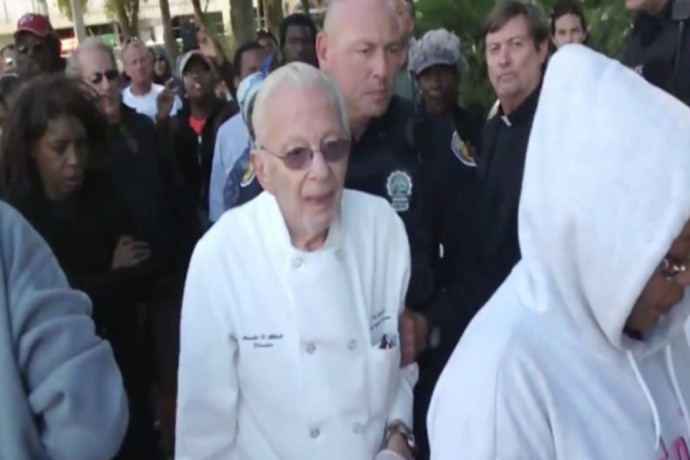 Arnold Abbot, a 90 year old man, and two pastors in Florida were arrested for feeding homeless people in Ft. Lauderdale. The city has a new ordinance that restricts feeding the hungry, making public food-sharing illegal. Arnold says the police officers approached and said “Drop that plate right now,” as if he was carrying a weapon.

The police then began to throw away all of the hot food, with the exception of, and this is the real kicker, five boxes of Dunkin Donuts.

Abbot runs a not for profit organization called Love Thy Neighbor, which he says has been on the wrong side of the law before. In 1999, Abbot sued Fort Lauderdale Beach because of a similar law. He won that case, and he plans to sue the city again for this.

“I’m going to have to go back to court again and sue the city of Ft. Lauderdale, a beautiful city. These are the poorest of the poor. They have nothing. They don’t have a roof over their heads. How do you turn them away?” Asks Abbott. “I don’t do things to purposefully aggravate the situation. I’m trying to work with the city. Any human has the right to help his fellow man.”

Ft. Lauderdale Mayor Jack Seiler saw the food-sharing ordinance as a solution to the homeless problem .

For most people, our culture has taught them that even the sight of homeless people is bad news. That’s exactly what Mayor Seiler believes. He says the homeless affect tourism, businesses, and tarnish the city’s image. But who in their right mind would think that starving the homeless is any kind of a solution to the problem?