It Is Now Illegal in Illinois to Film the Police 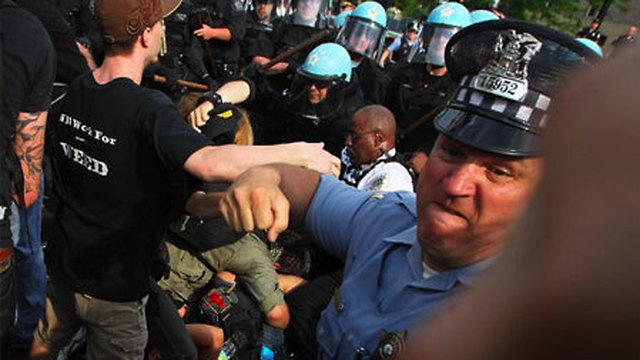 An amendment to a Senate bill in Illinois has been overwhelmingly passed to ensure that recording police officers and government officials is now a felony.

The Amendment to Senate Bill 1342 was stealthily introduced on the back of an unrelated piece of legislation last week. It essentially reestablishes a completely unconstitutional eavesdropping law that was previously overturned by The Supreme Court in March for being too draconian.

The amendment has stripped away safeguards to free speech rights from the original legislation and instituted a blanket ban on recording officials in public. It was passed by both the Illinois House and the Senate, with huge majorities, within two days of its introduction.

The new amendment legislates its way around the ‘reasonable expectation of privacy’ standard in law by refraining from defining it, and merely states that recording any “oral communication between 2 or more persons” is now illegal.

A class 3 felony is punishable by a prison sentence of two to four years. The bill also outlines that it is now a class 4 felony to record a private citizen in such circumstances. The crime is punishable by one to three years in prison.

(b) The eavesdropping of an oral conversation or an electronic communication of any
law enforcement officer, State’s Attorney, Assistant State’s Attorney, the Attorney General, Assistant Attorney General, or a judge, while in the performance of his or her official duties, if not authorized by this Article or proper court order, is a Class 3 felony, and for a second or subsequent offenses, is a Class 2 felony

“Police may argue that using body cameras to record encounters with citizens outside of “public” places would violate the law, as citizens have not consented to being recorded.” he writes.

In its previous overturning of the bill, The Supreme Court justices noted that the eavesdropping ban

“criminalizes a wide range of innocent conduct,” including “the recording of conversations that cannot be deemed private: a loud argument on the street, a political debate on a college quad, yelling fans at an athletic event, or any conversation loud enough that the speakers should expect to be heard by others. None of these examples implicate privacy interests, yet the statute makes it a felony to audio record each one. Judged in terms of the legislative purpose of protecting conversational privacy, the statute’s scope is simply too broad.”