Posted on September 3, 2014, updated on October 14, 2014 by inspiredneuron | 852 views
Article from LA Weekly, submitted by @inspiredneuron 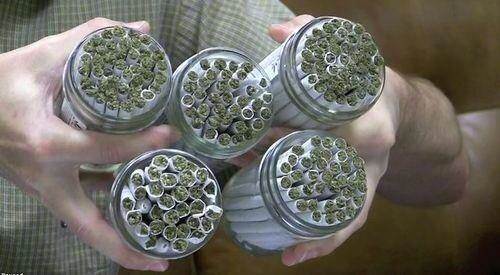 Harvest season is upon us. We’re not talking about tomatoes, lettuce and carrots.We’re talking about that most green of crops, marijuana. Late summer marks the beginning of bud harvesting in the Emerald Triangle growing region of Northern California, perhaps the most productive cannabis region in the United States.See also: Weed Prices Could Double Because of DroughtAnd California’s historic drought is having its effect on what has described as California’s biggest cash crop:Ed Rosenthal, an expert in marijuana cultivation known for his books on the topic, says that the drought is already showing its results when it comes to Golden State cannabis. “Crops will be 10 to 20 percent smaller,” he said.The result at this point isn’t a shortage at your local retailer but rather a price spike, he told us.He said that California growers would still reserve the lion’s share of good buds for the region’s sellers while shipping lower quality weed to other states, particularly Colorado, where recreational pot is in its first year of legal sales:

The best stuff is used in California and the rest is shipped out. The people in other areas don’t have our high standards. As far as California is concerned, a lot of the material that was going to be shipped out in a normal year is going to stay here, and the price for that is going to go up.

Rosenthal thinks concentrates (wax, honey oil, shatter), which rely more on the kind of cheaper, outdoor marijuana that is being shipped out of state, will be affected the most.Dispensaries in Los Angeles will still be able to count on strong, indoor, hydroponic weed, Rosenthal said. This will insulate us from the drought, but perhaps not from a price increase.When it comes to pot, “California is an exporting state,” he said.Who says Americans don’t make desirable goods anymore?