Walmart Strikers Sit Down in Protest 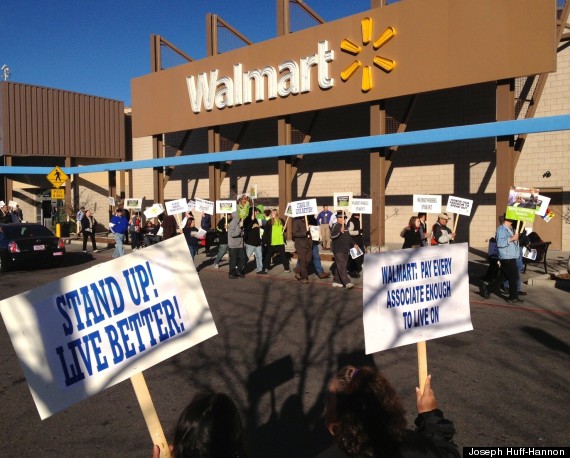 According to the media, Thursday, November 13th, was just like any other night; but not to Wal-Mart workers in the Los Angeles, California area. November 13th marks the first, of what will seemingly be many, protests that  started with Wal-Mart employees STANDING UP for what they believe in by SITTING DOWN on the job.

Hundreds have gathered to take a stand against the Waltons, and show that everyone deserves to be paid a decent salary. The peaceful sit-in protest turned sideways when the workers went outside, and “disrupted traffic” by blocking an intersection, resulting in 23 arrests by police in full riot gear waving batons. The 11 men and 12 women were cited for unlawful assembly, and failure to disperse, which in California are both misdemeanors and  punishable by fines, jail time, or both.

Martha Sellers was quoted, when asked about her participation in the protests saying, “It is going to send a message that we are escalating. We are growing.” There are already programs on social media that are trying to hold sit-in protests at Wal-Marts around the world. Two dates that keep popping up are November 19th and November 28th,  which is otherwise known as Black Friday.

These employees are taking action and standing up for what they believe in. I know what some people will say to these protests, some will say that if they don’t like it why don’t they just quit or go back to school?

The fact of the matter is that we need people like Wal-Mart employees for our current living systems to thrive. Everybody goes to supermarkets, retail stores, and restaurants. Those shelves don’t stock themselves. Those clothes don’t just end up on the racks. And your chicken breast that you could have easily made at your house didn’t just magically appear in front of you. Someone has to be a cashier, or a stock boy, or a waiter.

Our society overlooks those jobs sometimes because people can argue that it doesn’t take a huge amount of skill to do them. Basically, we need these workers because our society spends billions of dollars being consumers. Divine Society backs up the actions of these Wal-Mart strikers, and we hope that they can make their mark against the wealthiest family in America. We hope that these employees will be seen and heard.