The Secret Of Empathy 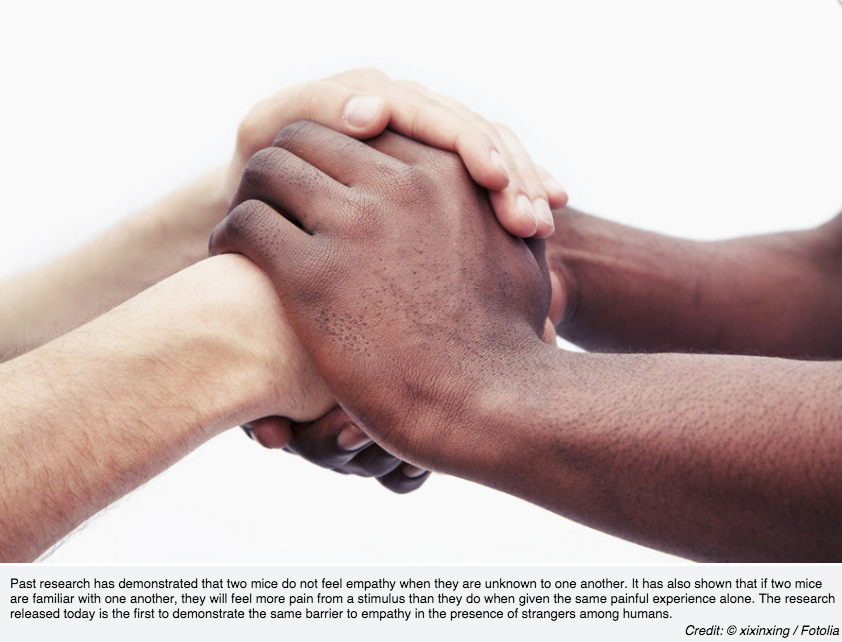 Stress from the presence of strangers prevents empathy, in both mice and humans

The ability to express empathy — the capacity to share and feel another’s emotions — is limited by the stress of being around strangers, according to a new study published today in the journalCurrent Biology.

“President Barack Obama has described an ’empathy deficit’ that fuels misunderstanding, divisions, and conflict. This research identifies a reason for the empathy gap and answers the vital question of how do we create empathy between strangers,” said McGill University psychology professor Jeffrey Mogil, senior author of the study. “In this case, creating empathy was as simple as spending 15 minutes together playing the video game Rock Band®.”

Empathy is increasingly being studied by scientists because of its known role in psychological disorders, such as Autism Spectrum Disorder and psychopathy. In studies of empathy, pain is often used as a stimulus because it is universally understood and easy to measure. Previous research by Mogil and other scientists has used this approach to show that capacity for empathy is evident even in lower mammals, such as mice.

In the new study, Mogil and his team compared the reactions of undergraduate students to painful stimuli in various scenarios: alone; with a friend; with a stranger; between two strangers given a stress-blocking drug; and between two strangers who had spent 15 minutes playing the video game Rock Band® prior to testing.

The student participants were asked to submerge their arm in ice-cold water and rate their pain. These pain scores remained the same whether they experienced the pain alone or sitting across from a stranger. However, the pain actually increased when these students put their arms in ice water across from a friend.

“It would seem like more pain in the presence of a friend would be bad news, but it’s in fact a sign that there is strong empathy between individuals — they are indeed feeling each other’s pain,” said Mogil.

Past research from Mogil’s lab has demonstrated that two mice do not feel empathy when they are unknown to one another. It has also shown that if two mice are familiar with one another (cage mates), they will feel more pain from a stimulus than they do when given the same painful experience alone. The research released today is the first to demonstrate the same barrier to empathy in the presence of strangers among humans. The researchers then investigated what prevented empathy between strangers and found the same cause in both humans and mice: the stress of being near a stranger. When researchers gave mice and humans the drug metyrapone — which prevents the “flight-or-fight” stress reaction — before the experiment, both students and mice demonstrated empathy for the stranger.

“It turns out that even a shared experience that is as superficial as playing a video game together can move people from the ‘stranger zone’ to the ‘friend zone’ and generate meaningful levels of empathy,” said Mogil. “This research demonstrates that basic strategies to reduce social stress could start to move us from an empathy deficit to a surplus.”

“These findings raise many fascinating questions because we know failures in empathy are central to various psychological disorders and even social conflicts at both the personal and societal level,” said Mogil. “It’s also pretty surprising that empathy appears to work exactly the same way in mice and people.”

The above story is based on materials provided by McGill University. Note: Materials may be edited for content and length.

McGill University. “The secret of empathy: Stress from the presence of strangers prevents empathy, in both mice and humans.” ScienceDaily. ScienceDaily, 15 January 2015. <www.sciencedaily.com/releases/2015/01/150115122005.htm>.