4 Spiritual Lessons From The Wickedest Man In The World

Posted on September 26, 2014, updated on October 4, 2014 by inspiredneuron | 956 views
Article from Loner Wolf, submitted by @inspiredneuron 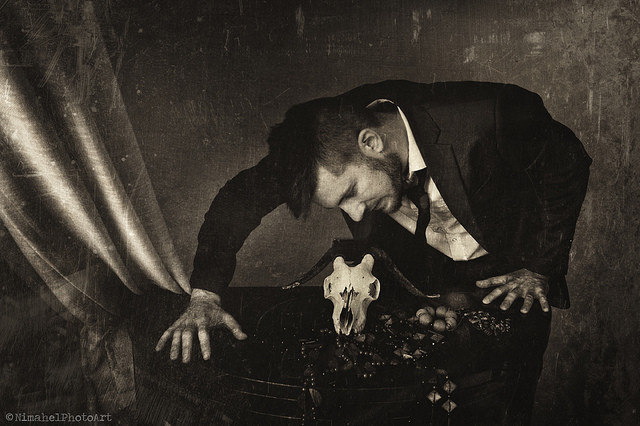 Aleister Crowley was one of the most original and important thinkers of this era – right up there with such titans as Einstein and Joyce.  Indeed, what Einstein did for physics and Joyce for the novel Crowley did for the mystic tradition.  He swept aside all 19th Century barnacles and incrustations, redefined every concept, and created something that is totally contemporary.  ~ Robert Anton Wilson

Aleister Crowley was perhaps one of the most infamous figures in history, who was incredibly misunderstood.  His life was filled with strange behavior that inspired all kinds of rumors and myths, and in fact, everything about him at a superficial glance gives you a deeply sinister feeling.

Anyone with strong religious attachments or sexual repression was put off by him which in the late Victorian, early Edwardian period was highly alienating.  The tabloids described him as the “The Wickedest Man In The World” because he, and his followers, experimented with drugs, sex and alternative states of consciousness in an attempt to develop greater self-understanding.  Yet once you read through his books and life story, you realize his actual depth and breadth of work.

To me, Aleister Crowley was a sincere seeker of truth, of self-fulfillment, and he contributed significantly to the spiritual, mystical and occult world as we know them today.  Today, I’ll go into his shocking and scandalous life, and the 4 greatest, and most surprising lessons we can learn from him.

Magick is the Science and Art of causing Change to occur in conformity with Will.  ~ Aleister Crowley Crowley was influenced extensively by different spiritual teachings (he studied philosophy at Cambridge), and was extremely well read in the works of Gnosticism, Rosicrucianism, Taoism, Hermeticism (Qabalah), Occultism, Hinduism (Kundalini etc.) and Buddhism.  He was also an avid practitioner and teacher of Raja Yoga (Royal Yoga).

Crowley’s teachings are more of an advancement of past traditions as opposed to an entirely unique system, and for this reason he called his method “Magick”(adding a “k” to distinguish it from stage magic and other associations), which he considered to be a new system of religion.  He named this body of work the “Thelema” (from the greek word for “Will”).

He felt Magick and Yoga complimented each other very well, though he found Magick more comprehensive for the Western mind as it focused on Greek individualism, extroversion and self expression by bridging the external world with the inner world, while Yoga is more naturally introverted.  Ultimately though, he described them both as leading to the same destination:

There is the general metaphysical antithesis that Magick is the Art of the Will-to-Live, Mysticism of the Will-to-Die (ego death); but — “Truth comes bubbling to my brim; Life and Death are one to Him!”  (Magick, Book 4)

This way of seeing the world, of joining opposites, was the reason he adopted the controversial Baphomet diety (goats head with a pentagram on his forehead) into his practices.  But this wasn’t as a Satanic idol (he didn’t believe in a biblical God or Devil), but rather as an alchemist symbol for the union of opposites.

Do what thou wilt shall be the whole of the Law.
Love is the law, love under will.

The basis of all Crowley’s ideas can be reduced to the above two maxims which he referred to as “The Law of Thelema“.

The first maxim “Do what thou wilt” can be reduced to “do what comes naturally” or as mythologist Joseph Campbell famously expressed: “Follow your bliss“.  This to him didn’t mean “do whatever you want” but rather, dedicate your life to finding out what is truly and deeply you, in essence, find your natural and divine higher self.  Crowley called this higher self, his ‘Holy Guardian Angel‘, that later became an entity known as ‘Aiwass‘.

To do this according to Crowley, you had to first get in touch with your “True Will“.

Your ‘True Will” is that which connects you back to what I’ve previously written about: your “authenticity“.  Krishna’s Atman (the true self), Buddha’s Anatta (no-self), Mohammad’s Allah all point in a similar direction: to that which fills you with awareness, passion, and with a meaningful and enthusiastic focus in life.

The idea seems simple, but most people are very disconnected from their true natural self, many aren’t even aware of such an existence.  In Crowley’s eyes (following closely the Taoist idea of “do what comes naturally”), we all have our path in life that is partly dependent on ourselves and partly on our environment.  Anyone who is sent off this path by not understanding themselves (e.g. by creating beliefs of how they should be) or external influences (doctrines, social values, etc.), is allowing their Conscious Will to conflict with their True Will.

From a young age Crowley was known for his rebellious, mischievous and headstrong nature.  He was brought up by strict religious parents (his father was a preacher and his mother a devout ‘fanatic’) and he delighted so much in disturbing others (something he continued as an adult) that his mother nicknamed him “The Beast”.  He enjoyed such a name so much that after reading the Book of Revelation he added “666” to his nickname that later gained him infamy.  One of the reasons he did so was that in Qabalistic gematria (or number mysticism) the number is associated with the Sun.  And when they asked him in court why he had self-designated that name for himself he explained: “It only means sunlight; 666 is the number of the sun.  You can call me ‘Little Sunshine.’”

He joyously identified with this nickname because it opposed the spiritual, intellectual, emotional, and sexual restrictions that he believed enslaved the human soul and prevented our “True Will” to make itself present.  It’s through this desire for self-exploration of the True Will that he, and his followers, used drugs in their spiritual school (Abbey of Thelema) that resulted in further scandals.  His reputation as a Heroin addict was true, though this was prescribed to him legally to treat his asthma before medicine knew of its additive nature.

As Buddhists explain it, to desire to be anything other than what you truly are is at the root of all suffering.  Crowley illustrated this in the following way:

The most common cause of failure in life is ignorance of one’s own True Will, or of the means to fulfill that Will.  A man may fancy himself a painter, and waste his life trying to become one; or he may really be a painter, and yet fail to understand and to measure the difficulties peculiar to that career.

In the second part of Crowley’s first maxim of Thelema, he states; “(Do what thou wilt) shall be the whole of the Law“.

Once you find your True Will, your path with heart, or that which fills you with aliveness and joy, follow it with deep conviction and don’t let anyone or anything prevent you from it.

The pagan Wiccan philosophy expanded on Crowley’s law decades later by adding; “And ye harm none, do what ye will.”  This is a wise buffer to add as this law can easily be taken out of context, and can return it again to the misguided attitude of: “do whatever you want”.

This second part is not an anti-authoritarian idea but something of much deeper meaning.  Thousands of years of religious conditioning and the societal virtue of ‘self-sacrifice’ has weakened us, creating self-rejection and a high susceptibility to authoritarian power.  Crowley’s attitude steers away from puritanical models of personal debasement and self-reduction, and instead employs a robust self-inclusive celebration of our true nature, encouraging us to embrace our sexuality,self-esteem, passion, and personal empowerment.

In a way, Crowley really was a man ahead of his times.  He believed there was no need to hate or debase ourselves, or to psychotically crucify ourselves as ‘sinners’ in order to be aligned with our true natures.

Love Is The Law

In his second maxim Crowley states; “Love is the law, love under will.”

Crowley felt that the binding force behind the universe is love.  Not a superficial libido focused love, or a mental love rooted in attachments, fears and sentimentality; but a love that is guided, that arises from our True Will, from our deepest inner guide.

This love is what we would call an “unconditional love”, or a love free from personal attachments as the Buddhist refer to it.  Christ referred to it as being capable of “loving your enemies”, but however you want to call it, this type of love is the hardest to achieve.  This is not a love that is characterized by your typical love and hate dichotomies – “Love under Will” is an all-encompassing love, a love that arises from truth, from a transcendence of our “False Will” beyond our ego’s.  This type of love is what some define as ‘Oneness‘.

Another lurid title newspapers used to report Crowley’s activities at his Abby of Thelema was; “The King of Depravity“.

Sexual Yoga’s, like the Tantra, are all based on the idea that through sexual union comes knowledge.  The bible itself uses the word ‘know’ as synonymously as it does with the word ‘sex’.  So in essence, it is thought that the act of sex opens the possibility of truly getting to know someone, to see their True Will.

Unless you are aware of what you’re looking for, sex only becomes a desire to find a partner or enter aimless stimulation seeking pursuits, missing out on its higher potential.  That is where Crowley’s conceptual teaching of “Sex Magick” comes in.

Crowley was aware of the potential of sex.  He saw that it can either reinforce your belief that you are merely a separate body that receives pleasure, or if approached through Sex Magick, the peak experience of sex, the orgasm, becomes a powerful tool for overcoming ones identification with individuality.  That climatic moment becomes an experience where we go beyond our thoughts, experiencing immense inner silence.  This is also known as the Zen state of ‘no-mind’, of a calm present awareness.

In that way, an orgasm becomes a means towards a momentary glimpse into a state of desirelessness, of deep fulfillment and blissful contentment.

Crowley sums up his thoughts on sexual energy in his Confessions book:

The shocking evils which we all deplore are principally due to the perversion produced by suppression’s.  The feeling that it is shameful and the sense of sin cause concealment, which is ignoble, and internal conflict which creates distortion, neurosis, and ends in explosion … The sexual instinct thus freed from its bonds will no more be liable to assume monstrous shapes.  Perversion will become as rare as the freaks in a dime museum.

Aleister Crowley for the many reasons listed above and more, still remains a controversial figure, who, because of his reputation, has had much of his genuinely interesting approach to spirituality unnoticed or misunderstood.

Crowley’s work can only truly be understood by those who wish to penetrate deeply into the mysteries of life, and are open to having any attachment they have shattered by Crowley’s mischievous nature.

I hope this article, if anything, can provide a different perspective on the way we see this historical ‘wicked weirdo’.