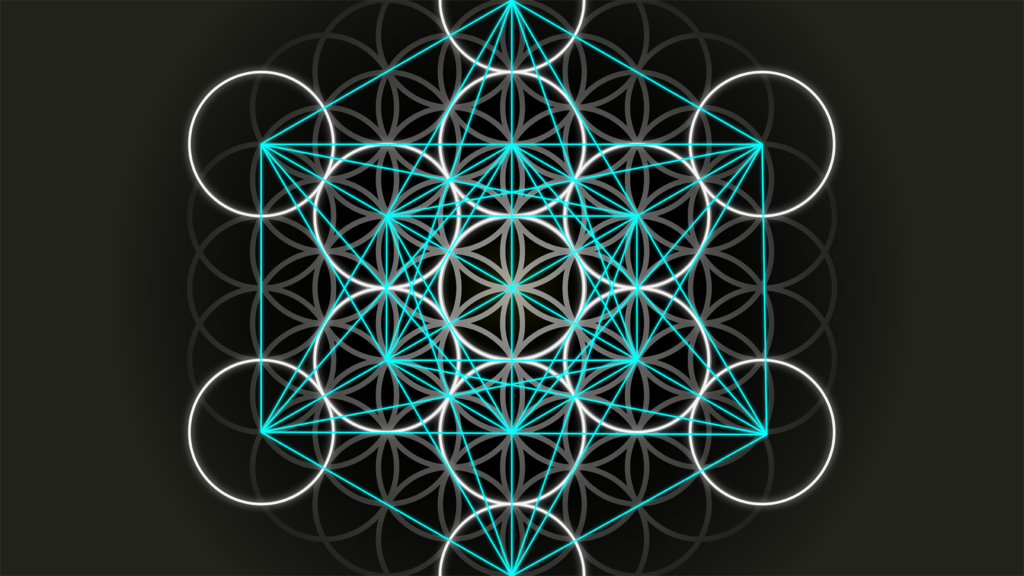 The Universal Consciousness has manifested itself in a plethora of ways, all of which represent some aspect of it’s infinite and perfect nature.  One of the most archetypal yet physically pervading representations of Source’s vast unfolding personality is the Sacred Geometry known as Metatron’s Cube.

This array (shown as the featured image above the article title) can be viewed as an arrangement of 13 circles (12 around 1) with all of their centers being connected by straight lines (representing the female and male aspects of creation).  What becomes nested in the completed image are 5 very important polygons known as The Platonic Solids, which directly correlate to the 5 Elements.  These 5 shapes are the only structures in our world that all have the same amount of faces and vertices.  The ancient Greeks, including Pythagoras and Plato used to consider them sacred and they as well as Alchemists understood them to be the very structure of physical reality on the microscopic scale.

Even though Metatron’s cube is being viewed in 2D, these polyhedra appear as three dimensional outlines, denoting that the Metatron’s cube can actually be a 3D structure as well.  When you imagine what it would be like to turn the image in 3D, you actually see a tesseract folding in on itself, translating to a 4D Hypercube.

The 2D array that we’re viewing is but a shadow of a shadow, revealing hints of the true archetypal form this great tool of creation holds.  With the principle of Correspondence in mind(as above, so below), we understand that this geometry has it’s place on all planes of existence, infusing itself in all forms of experience.  With that being said, we must also understand that the Platonic Solids have their place in all planes as well, represented as Elemental forces in various degrees of manifestation.

Let us delve deeper into these various degrees of Elemental expression so we may further understand the Universe we inhabit and create.

(Information is taken from a variety of sources as well as intuitively gathered.  To explore more about these Platonic Solids from a mathematical point of view, click here.  Also know that the Sense associations are only representative as fractal manifestations and are not the exclusive means to access these energies.)

Now that we have a basic understanding of the Elements, I’d like us to look at the cosmological makeup of the Great Physical Plane.   This will reveal a corresponding arrangement relative to that element’s vibrational frequency.  The closest element to our physical bodies is Earth, it is directly under our feet and makes up our physical bodies as well.  Then we have Water, filling up the veins of our bodies and rushing through every vein and valley of the Earth, providing a crucial component to the mediation of nutrients and efficient lubrication for all functions throughout life.

Air then permeates above and around these elements, being inhaled by the majority of lifeforms as an essential form of sustenance and playing an important role in the biosphere’s natural dispersion of temperature, weather, pressure, and.  Then we have Fire, the Sun, being the center point that these other elements orbit around, providing light (and thus knowledge), the only source of heat (which is essential in this extremely cold vacuum) and energy which is directly absorbed by all life in some manner.  It also heats water so that it will precipitate, rise and create clouds(something to take note of for later spiritual correlations).

Now Aether or Akasha can be viewed as the Dark matter and Vacuum space that exists everywhere, in and around all things, making up 99.99999% of everything.  This is the Quantum Waveform or Zero-Point Field which allows for reality to be created through conscious observation.  It is the Divine Feminine presence manifest.

Some scientists have even found evidence that our universe might be in the shape of a Dodecahedron.  Do you now see how these Elements are all absolutely essential aspects of life and creation?  This is only on the matter aspect of this Great Plane, let’s look deeper into our Energy bodies to see the correlation we can draw there.

Our Root chakra is also considered the Earth chakra, because it’s associated with physical manifestation and action.  It connects directly with the Earth through our feet and other energy pathways.

The Sacral chakra is considered the Water chakra, as it deals with the flow of our emotions and is associated with bodily fluids.

The Solar Plexus chakra is associated with Fire, because it deals with the self image or personal essence, and is said to be a storehouse of powerful will energy.  It also is considered the source of bodily heat.

Here is a mystery that I have been contemplating for some time.  Why are these elements vibrationally aligned in other systems so that Fire comes after Air, but in the human system, Fire comes before Air?  I have meditated on this and asked for guidance, and so far I have learned that even though these elements are aligned the way they are throughout the higher planes, there is a sort of spiraling of energy between certain elements in the way they are directed to manifest as species.

Different combinations of elements create different forms of consciousness expression, being arranged in a way that brings about a certain unique type of spiritual progression for every species.  Our particular expression as a human race is through the progression of ego, self control and will coming before our Nature of freedom, love, intellect and open communication are unlocked in the Heart and Throat Chakras.  Other orders may be different for other species, but we must understand where we are relative to the unfolding Cosmic plan.

Akasha is represented in the Third Eye and Crown chakras as they act as our connection to the Cosmos and the Divine realms of Consciousness.  It connects us to the quantum ocean of possibilities.

When we visualize a Platonic Solid in our minds, especially with the knowledge of their corresponding element, we are subconsciously infusing that thought with an elemental vibration.  Since our thoughts have actual form on a higher plane, this is very practical for doing energy work and all forms of higher dimensional creation.

Because each Element is vibrationally representative of a Focus, we may also use these geometries as conceptual gateways into higher realms of existence.  Using the Cube as a symbolic Gateway will allow you to phase into the Real-Time Zone, while using the Icosahedron will allow you to phase into Focus 2.  The Octahedron will take you to Focus 3, The Tetrahedron and the Star Tetrahedron will take you to Focus 4, and The Dodecahedron will connect you with the Akashic Records or Zero-point Field.  We will be discovering the methods to go about doing this in our next Phase of Mastery.

Another method of invoking these elemental energies is through the use of Mudras or hand positions.  Our fingers can each be associated with an element, as the very 5-ness of our physical bodies is a direct unfolding of the 5 archetypal fractal throughout the planes of existence.  Each limb can be associated with an element as well but there are many interpretations of how these energies can flow.  In most instances, those who believe in their interpretations will be right as the belief structure will direct the flow of these energies in this way.  For now, let’s just focus on agreeing with a default association for the fingers.

The thumb is always Akasha, as when it connects with another finger element, it produces that elemental force through transferring the Prana into it.  From there, it will be Index associated with Air(as it directs mental attention), Middle with Fire(as the human energy system appoints it one lower than air), Ring with Water(as it’s vein connects directly to the heart, allowing it to be most tuned to the bloodstream), and the pinky with Earth(as it is the ‘lowest’ in vibration).

Here’s a quick technique to balance all the elemental energies within you:

Thank you for reading this article, and if you have not read the articles prior to this one, please search Ascend Academy in the search bar, reading bottom to top in succession as you see fit.

Once again, if there are any questions about the article or about spirituality in general, feel free to email (ryan.boyd@live.ca) or add me on Facebook (Urban Mystic).

In two weeks, I will begin Phase 6, The 6 Ways of Light.  Due to the amount of content for this Phase, I will be splitting it into 6 articles, which will be presented every two weeks (or earlier if I can write it all out fast enough).  This will benefit many light workers and spiritual explorers alike, as it provides a customizable spiritual path and related practices to develop all forms of psychic and light working abilities.  I am very excited to present it to you all.