Consciousness Definition and Why Do You Have It?

Consciousness is understood by most people as being aware, but there is a lot more to consciousness than just being in a state of awareness. Consciousness is one of the hardest things to define because of its mysterious and metaphysical properties. At your current state of evolution, it is impossible for you to understand all the aspects of consciousness. However, you can still understand many of its different states by studying how it affects your perception and the structures of reality. Is consciousness energy? The simple definition of consciousness is that it is basically energy that is aware. How could that be you may ask? To understand how consciousness and energy are basically two of the same thing, you need to study the effects of particles. To help you comprehend this concept, we need to turn our attention to a famous scientific experiment done by a group of scientists at the Weizmann Institute in Israel. This famous experiment is known as the “double slit” experiment. In the double slit experiment, scientists shot some electrons through two slits and discovered something strange about the properties of electrons. They found that electrons could simultaneously be in a wave and particle state. The strange thing about this experiment was that when the electrons were shot through the two slits without anyone watching them, they produced an interference pattern and became waves. When they were observed, they went through the slits as particles, causing the interference pattern to diminish. If you are confused, watch the following short video and it should help clear things up. Dr Quantum: Wave Particle Duality and the Observer!

The double slit experiment showed evidence that particles and molecules are conscious to some degree since they are aware. Some scientists have taken this experiment further and found that the unified field in which reality exists and grows in is even more conscious. The more they examined the deeper layers of the unified field, they realized that it was more aware, conscious, and intelligent than particles. Since matter doesn’t really exist beyond the subatomic level, it is logical to say that it must be energy that is conscious! Once we connect the dots and take a step back and look at the big picture, consciousness and energy are basically the same thing. When we break matter down to the level of particles, it becomes mostly empty space. The remaining space that seems to be not empty is actually made of energy. In other words, everything in the Universe is made of energy. Do you still remember the definition of energy in high school physics? Energy is a “substance” that can’t be created or destroyed. It can only be transformed from one form to another. Since everything is made of only energy, then it is energy that is conscious, not the matter-based brain. Why do you have consciousness? One of the main reasons why you have consciousness is to be aware that you are a living sentient being, so that you can co-create. However, there is a lot more to it than just being aware. To have a better understanding of why you have this intelligent energy, you need to study the different layers of the mind, such as the subconscious and conscious. The subconscious state is where the mind is in a dream-like free floating state. It is the safe deposit box of all your memories and experiences, good and bad. It stores feelings and impressions created by all the experiences in your life. This state of mind operates below your conscious awareness, which is why you aren’t usually aware of its activities. Most of the information about your environment is processed by your subconscious, which is why you don’t see your environment as energy. Instead, you see it as solid objects with beautiful colors and textures. For more information on how reality works, read this article titled What is Reality: How It Relates to Your Well-Being. The state of your mind that you are consciously aware of is the conscious. This state allows you to be aware of your conscious thoughts and actions, giving you perceptions of your environment. Unlike the subconscious mind, the conscious mind processes information about your environment in a linear method, allowing you to experience life in a way that you can understand. Your consciousness is what gives you the ability to become aware of your environment. It is your consciousness that dictates your actions and its subsequent consequences. It is what makes you alive and therefore it is the essence of who you are. Without consciousness, you and your reality will cease to exist since everything is made of this intelligent energy. 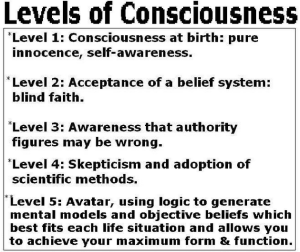